This winter, as Covid-19 began to spread across the United States, a team of scientists, engineers, doctors, and students at the University of Vermont wondered if the pandemic might overwhelm the state’s hospitals—and, particularly, if there would be enough ventilators. So they set out to design and build a simple, inexpensive, emergency ventilator that could be used in Vermont—or anywhere else around the world. They’re succeeding.

In the second week of March, Jake Kittell began to panic. The previous two springs he’d gotten sick with pneumonia, “which makes you realize how nice it is to breathe,” the UVM research engineer says. “And I’m hearing about this virus and it’s really dire.” Thousands had died in China, hospitals in Italy were seeing hundreds of Covid-19 patients in acute respiratory distress, the first cases were being reported in the United States, and some models suggested that Vermont could soon have several thousand critically ill people, many of whom would need mechanical assistance to breathe—far outstripping the state’s supply of ventilators.

The next Monday, March 16, Kittell drove from his house in Morrisville to his job at UVM’s IMF Labs, a facility that designs and fabricates custom instruments and devices for professors on campus, and for researchers and businesses across the state. “I’m thinking: there’s an awful lot of people who are going to get sick. We’re engineers. We’ve got a machine shop,” Kittell says. “The world needs ventilators—we can make them!” 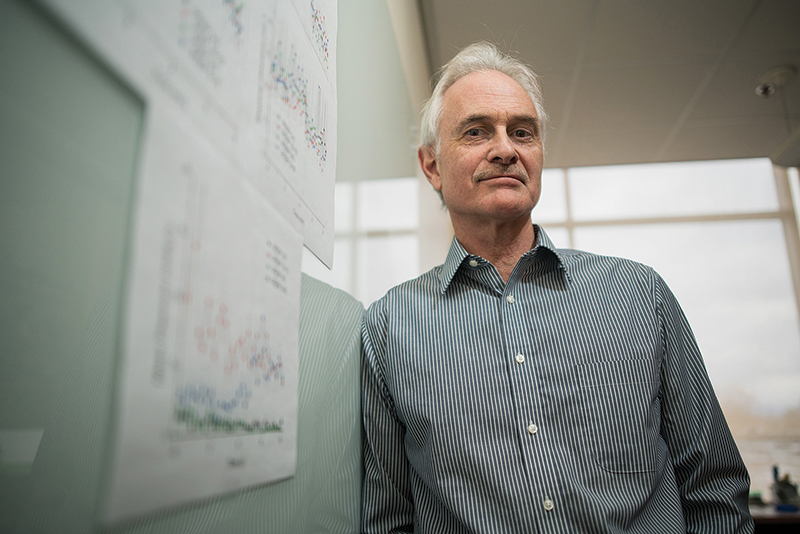 On the previous Friday, on another side of campus, lung expert Jason Bates—a professor in both the Larner College of Medicine and the College of Engineering and Mathematical Sciences—got a text about a patient on a ventilator, seriously ill with Covid-19, in the intensive care unit at the University of Vermont Medical Center. The text grabbed his attention because the patient was being cared for with an unusual mode of ventilation called “airway pressure release ventilation,” or APRV—and “this patient was doing rather well on it,” Bates says.

This type of ventilation applies a pattern opposite from normal breathing: the patient receives long inspirations of air that are held inflated at a constant and relatively high pressure, Bates explains. Then “at regular intervals, short expirations are allowed during which the lungs expel carbon dioxide,” he says—but never long enough for the inner lining of the lung to collapse against itself.

Bates suspected that APRV would be particularly useful for some patients suffering with the new coranavirus. “One of the main complications from Covid-19 is called acute respiratory distress syndrome, a disease where the lungs fill up with an inflammatory fluid,” explains Dr. Anne Dixon, director of pulmonary disease and critical care medicine at the UVM Medical Center and College of Medicine. “Many of these patients end up being dependent on a ventilator for fairly prolonged periods.”

For more than fifteen years, Bates has been doing research on the damage that occurs in lung tissue during the kind of illnesses now showing up in Covid-19 patients—and he’s a world-leading expert on the many ways mechanical ventilation itself can cause further damage to the lung. How to best avoid injury induced by ventilators is controversial and murky. For many patients, intensive-care doctors set a ventilator to follow a normal breathing pattern—but with a smaller-than-normal volume of air—trying to avoid too much stretching of the lung tissue. They fear overinflation.

But Bates’s research is part of a growing body of evidence showing nearly the opposite: that a major risk to many patients comes when regions of the lung collapse. Then, the damaged and delicate lining of the lung comes together, sticks, and then is peeled apart—over and over. “This peeling apart process is extremely injurious to the lining itself and can damage it to the point of allowing fluid to leak into the lungs from the capillaries that course through it,” Bates says. “Once this starts happening, the damage from peeling becomes worse, causing ventilator-induced lung injury to progress in a way that is difficult to reverse.” He’d seen how APRV could fend off this death spiral in other types of lung disease—and he expected that it would be true for Covid-19 patients too.

So when he learned that Josh Farkas—the attending physician of the patient in the UVM Medical Center—had texted “APRV is da bomb for covid” it made “perfect sense,” Bates says.

That weekend, Bates began mulling over what he could do to help against the Covid-19 storm that seemed to be heading fast toward Vermont. APRV might be a great mode of ventilation to help Covid-19 patients—but not if there weren’t enough ventilators. “I had an idea about how one might apply APRV with a short expiratory duration using a very simple system comprised of few components that could be made and assembled cheaply,” Bates recalls. He even made a sketch. “It was just an idea that I found somewhat interesting, but I could not see how it could be realized rapidly enough to serve the current crisis.”

Then, on Tuesday, March 17, he got an email from Jake Kittell. “I knew Jake from a previous project,” Bates says, so when Kittell asked him if he wanted to get involved in an effort to build emergency ventilators for the Covid-19 crisis, “I naturally said sure,”—and sent him his sketch. “It was an ingenious and elegant concept,” Kittell says. “Two rotating discs, each with a hole—when they cross, it vents, and when they don’t, it’s pressurized. It’s that simple.” The next morning, Carl Silver contacted Bates to say he had built a working prototype of his idea—and emailed him a video of it in action. “I was stunned,” Bates says. “I realized the expertize and facilities were at hand to make an emergency ventilator a real prospect.”

____
?
On a fine afternoon in mid-May, the Vermontilator, generation 3.0, stands, gleaming, on black cloth, surrounded by machine tools and drill presses, in the IMF Lab. Wearing homemade masks, Jake Kittell and Carl Silver unscrew the sheet metal top, calibrate the custom regulator inside that will protect patients against excess pressure, check the eight LED alarm lights, twist a knob to select a breath period of 4.4 seconds—and then they turn it on. A mesmerizing long hiss and short puff—hiss and puff, hiss and puff—comes out of the metal box and hoses as a nearby mechanical test lung rises and falls. Five nearly assembled copies of the ventilator stand on a workbench nearby, getting ready to be sent out to doctors and other lung specialists at the UVM Medical Center for pre-clinical testing.

A lot happened in two months. 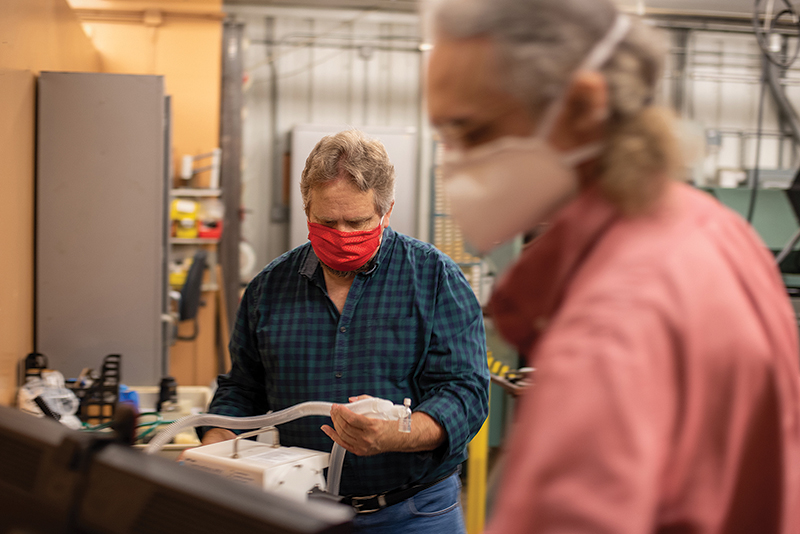 Once Jake Kittell, Carl Silver, and Jason Bates realized that their late-night thoughts and pencil sketches had practical legs, they’ve been running nearly non-stop. Mike Lane, the director of the IMF Labs, immediately saw the Vermontilator’s potential to save lives, and put Kittell and Silver to work on the project full time. Then he began making connections with people in Vermont’s manufacturing community who might help. With the state under a stay-at-home order, much of the work was planned on a near-daily video meeting—Kittell updating designs and testing parts from his machine shop at home, while Silver built prototypes in the IMF Labs on campus.

Bates consulted with Anne Dixon, Josh Farkas, and other critical care and pulmonary doctors—as well as respiratory therapist Emily Parent—in the medical center. He also recruited Guy Kennedy, a skilled IMF engineer in UVM’s Department of Molecular Physiology and Biophysics, to join the team. From Williston, Tim King ’76, a consulting engineer and expert on process management, jumped in to help develop an application to the FDA for emergency use approval. Corine Farewell, Kerry Swift, and others in the UVM Innovations office, joined the team to help file patents, and plan for licensing and commercialization. They quickly engaged the Vermont Manufacturing Extension Center that, in turn, recruited a team of Vermont manufacturers—Kalow Technologies in Clarendon, Preci Manufacturing in Winooski, Dessureau Machines in Barre, GW Plastics in Royalton, and Ivek Corporation in North Springfield—to contribute expertise, build custom parts, and plan for production. Negotiations are now underway to take the Vermontilator to market once final FDA emergency use approval is secured—twenty at first, then hundreds, though “eventually, tens of thousands could be needed,” says Kittell.

A commercial ventilator can have 1,500 parts, supplied from more than a dozen countries, and cost well over $25,000. Silver built the first prototype of the Vermontilator in one day with about fifteen parts he found in his house and UVM’s IMF Lab. Over the weeks, the Vermontilator has gotten more complicated. It’s now at eighty-five core parts, Kittell says—plus some electronics for a safety system built by electrical engineer Ben Holleran. And Bates’s original guess that it could be built for “a few hundred bucks,” has come into focus with a likely production cost closer to $2,000—as the team has worked to meet the FDA’s requirements for alarms, pressure release valves, water resistance, and other safety features. “But the goal has always been to make it as dirt simple as possible,” Kittell says. “In a normal ventilator, the computer controls everything. Ours is mechanical.” Bates’s rotating discs with holes, driven by a simple DC motor, remains the heart of the device. “This can be fitted to run on just a car battery,” Kittell says. “We want people anywhere in the world to be able to use this.”

Sadly, far-away parts of the world may have pressing need for the Vermontilator. With the tremendous cooperation of thousands of people—social distancing, closing businesses, wearing masks, staying home—the worst-case scenario for the Covid-19 epidemic in Vermont was avoided. The emergency field hospitals erected at UVM’s Patrick Gym and Champlain Fairgrounds haven’t been needed. “It’s pretty clear now that we’re not going to be using the Vermontilator in Vermont because the surge has been suppressed to the point where everything is well within the capacity of the medical center,” says Bates. But the worst case—or, certainly, a terrible case—still looms for many places in the world where Covid-19 has yet to arrive—or rages now, but without adequate health care systems.

A few weeks ago, Jason Bates was contacted about the Vermontilator by someone who works for the World Bank in the Central African Republic, a nation of five million people. “They have three ventilators for the whole country,” Bates says. A post-doctoral researcher in his lab has been opening conversations with health care experts in Brazil about the potential use of the Vermontilator in overwhelmed hospitals there. And three students in UVM’s Sustainable Innovation MBA program, including Ruchi Nadkarni, have been working with staff in UVM Innovations to build connections to other vulnerable countries with few ventilators. “Covid is just now catching countries like India and Kenya,” Nadkarni says. “I’m seeking channels for the Vermontilator to enter these frontier markets, by liasing with the World Health Organization and others.” But the swift and deadly virus that causes Covid-19 cares not one whit for the ponderous work of aligning regulations and technology transfer. “We have a lot that needs to be done—and we have to do it fast,” Nadkarni says. “In thinking about how to bring a ventilator, that may cost north of a thousand dollars, to countries where many people make less than two dollars a day—there are so many moving parts.”

UVM is a Top 55 Public University