Dr. Lynn Black has traveled the globe as a medical relief worker; as Covid-19 cases began to rise in Boston, she helped lead preparations at Massachusetts General Hospital. Photography by Faith Ninivaggi.

Dr. Lynn Black ’74 has boarded flights headed for Guam after a super typhoon, to Haiti in the wake of a massive earthquake, and to Liberia in the midst of a devastating Ebola outbreak. Each time, Black, who is the medical director of Massachusetts General Hospital’s disaster relief team, packed up her mosquito net, headlamp, and water purification tablets. But she didn’t need any of those items for the disaster she was flying toward now. As the plane dropped through the clouds, the skyline of Boston came into view. For this disaster, Black was flying home.

“I never, ever thought this would happen here,” she says.

The veteran emergency and primary care physician had been visiting her daughter in Florida the first weekend of March as news of the rising number of cases of Covid-19 became more and more dire, especially in Boston. Black knew the city’s life, as well as her own, was about to change suddenly. The morning after her flight home, Black took charge of quickly opening and running two outpatient Covid-19 respiratory illness clinics at MGH. The larger one, a former sports medicine facility a few blocks from the main hospital, was transformed in the matter of two days—walls put up and treadmills cleared away for examination tables.

Black trained a wide range of nurses and doctors on how to safely don their gowns and masks, how to evaluate respiratory distress, and how to scrupulously clean the examining rooms after every patient. And as the list of symptoms for the virus lengthened or safety protocols changed every day, that training continually evolved. The team examined more than one hundred patients a day at the larger clinic, screening for patients who needed to be admitted to the hospital immediately.

Some people arrived with bad colds or possible signs of the virus, but were well enough to be sent home. Others walked in with oxygen levels so low they had to be rushed over to the hospital. Black says, “Usually when I see people like that I’m getting ready to put them on a ventilator.”

Over the coming weeks, the number of Covid-19 cases in Boston spiked as the city with world-class hospitals and doctors devolved into one of the country’s hot spots. At MGH, Black was so busy she had trouble keeping track of which day of the week it was. She arrived at the hospital by 7 a.m. Her husband, who is also a doctor, picked her up each evening around 9 p.m. She shed her scrubs just inside the front door of their Cambridge home and dashed for the shower to rinse away any rogue bits of the virus. Late dinners were followed by mostly sleepless nights, broken by getting up to scribble notes for the next day. Rising at 5:30 a.m., starting the cycle again, Black looked forward to her beloved cup of coffee, her only one of the day, on the drive to work. No drinking coffee with a facemask on, she notes, and adds, “Do you like how focused I was on coffee? The more drastic things get, the more I focus on something tiny.” 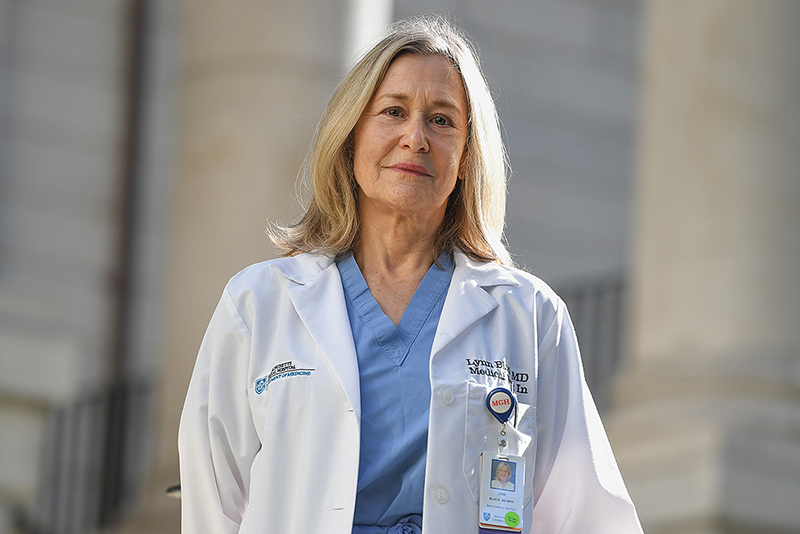 UVM runs deep in Class of 1974 alumna Lynn Black’s family: son Ben is a 2011 grad; sister Leslie Black Sullivan is a 1977 grad; and brother-in-law Tom Sullivan was president of the university from 2012 to 2019 and is now a professor of political science.

On a blustering spring morning, Black poses for a photo outside MGH in standard hospital attire: scrubs, white coat, black clogs and, now, a facemask. Her blonde hair blows in the breeze. Her eyes are bright over her mask. When she talks or laughs, the mask puckers in and out with her breath. Only when the camera is ready does she quickly remove the mask, smile, and then put it back on.
?
“I have to be a role model,” she says, and then hurries inside for another long shift.

Black has been working in disaster relief for nearly twenty years. In addition to her role at MGH, she is also the chief medical officer for the federal government’s Trauma and Critical Care Team. When catastrophe strikes in some corner of the globe, chances are high Black will soon be on the ground there.

Despite this resume, the doctor never had a grand plan to work in disaster relief medicine. In fact, when the Long Island native enrolled in nursing at UVM she wanted to be a nurse to help people who were marginalized and invisible. The question was how. At one point, she switched her major to human development, which inspired her, but then returned to nursing believing she could accomplish more as a nurse. ?
After graduating in 1974, she worked as a nurse for a few years in Boston and then Connecticut. Then she headed south to the University of North Carolina, Chapel Hill, where she earned a master’s degree in public health as well as her MD.? Still, she says, she’s never quit thinking like a nurse, which has made her the doctor she is.

“I’ve always been more focused on relieving suffering,” she says. “If a patient is cold in their room, I’ll go get them a blanket. I am not just focused on the medical treatment but on the patient.”

For years, Black worked as an emergency physician at Emerson Hospital, a community hospital west of? Boston before joining MGH in 2005. There, she typically treats patients in urgent care and coordinates the hospital’s work with affiliated hospitals, in addition to her disaster relief work.

What she has learned over her many missions is that disaster relief work encompasses more than medical care. You have to learn the local laws and culture. You have to work with local leaders and government officials. Black learned all these skills on the ground as every mission has taught her something new, she says. On one of several missions to disaster-prone Haiti, she saw how good intentions could have bad results.? Smaller, less organized nonprofits showed up to help. One started giving candy to the local children, she says. But people were starving, and so they began to fight over the candy. “On that mission I learned everything you do has a consequence,” she says.

In Haiti after the massive 2010 earthquake, as aftershocks rattled the traumatized country, thousands of displaced people began to camp just outside the hospital, which was considered the safest place, Black says. They had no food or water. The tent city was becoming a humanitarian crisis of its own. Women brought their babies in claiming they had fevers, hoping they would be admitted to the hospital only to be turned away.

“Often the most challenging thing in a disaster response is not the medical or surgical treatments,” she says. “It’s the moral and ethical dilemmas. You may only have room for one person in the helicopter, but there are three who need to go. Who do you pick?”

Each mission has also taught her to be flexible. Supplies don’t arrive on schedule. Planes don’t leave when planned. In Haiti for the 2010 earthquake, Black and other relief workers had to sleep on the grounds of the U.S. embassy while they waited for their medical supplies to arrive. You also have to be ready to do whatever needs to be done, she says. “You have to be ready to clean the latrines,” she says. “You may be an orthopedic surgeon, but you may be doing nursing activities. There is not the familiar structure or roles that exist in a hospital.”

Over the years, she’s also learned how to manage her fatigue and stress. She takes her iPad on every trip, charging it whenever she is near a power outlet, so she can read historical novels. “I have to read,” she says. “That’s very important to me. It’s the way I can transport myself.” Disaster workers have the privilege, she says, in knowing that at some point they will board a plane and leave crisis and chaos behind for the comfort of their own lives. There, of course, has been no doing that this spring. This disaster is our own.

Black says she coped by talking with her daughter in Florida and son in Denver whenever she could, but worried about when she could see them in person again. Then, as the number of cases began to surge in Boston, her father-in-law died of Covid-19, alone, in a hospital room in New York City. “We tried to talk with him virtually, but he didn’t have his hearing aids, so he couldn’t really understand us,” she says. “It was heartbreaking.”

In Boston, as tulips bloomed and tree leaves unfurled in the late April chill, the number of Covid-19 cases finally began to drop. Yet, as fewer people came to the testing clinics with coughs and fevers, a new problem emerged. In the thick of a crisis, Black notes, disaster workers can grind away; but when the pace starts to ebb, the emotional toll often comes due. Many Boston healthcare workers were overwhelmed by all the death they had witnessed or grappled with wishing they could do more for the most severely ill isolated patients.
?
Black was re-assigned from running the testing clinics to coaching her fellow frontline colleagues. She talked to them about their worries, sorrow, and troubled dreams. For some, the pandemic had upended their confidence in themselves, the hospital, even the country.

“Americans tend to feel they are a little omnipotent,” Black says.? “I think coming up against this in the United States has been incredibly challenging. It’s humbling to realize that you can have all your pieces in place and this tiny, little virus can knock it all down.”